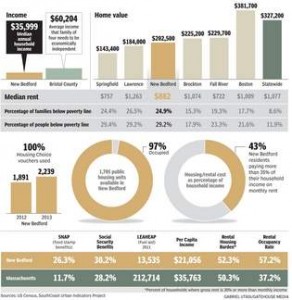 NEW BEDFORD — With rents averaging $750 in New Bedford, about half the cost of Boston and other metro area housing, some city and neighborhood leaders are questioning whether New Bedford has become a magnet for the poor.
“This is a conversation the community needs to have,” said Mayor Jon Mitchell. “New Bedford can’t be seen as a community of last resort. We need to be seen as a community of choice.”
Since entering office four years ago, Mitchell said he believes an influx of low-income people to the city is one of the major challenges to the city with implications for “neighborhood stability, school performance and economic competitiveness.”
“I have been concerned for sometime about the influx of dependency into New Bedford,” said Mitchell. “It’s evident based on numerous conversations with school officials, police and residents across the city. It’s pretty clear that there are major demographic shifts taking place in the city in which individuals displaced from much more expensive housing markets like Boston and New York are flocking to the much lower cost housing market here.”